Hey there! Thanks for checking out my website! Below you can find a sampling of recent projects I've been working on, in addition to frequently devising new ensemble work  in Brooklyn, Letter of Marque Theater Co! For quick samples of my work - including my Commercial Voiceover Demo and Film Reel - be sure to check out the Media Tab above! Thanks for visiting and enjoy your stay!

As I make plainly obvious for anyone visiting my living room in Brooklyn, I am a LARGE - HUGE even - gaming nerd. There are no less than 3 bookshelves (and more still I've left behind in my poor parents' basement) stuffed with all manner of board games and role-playing games. And dice. And hand-drawn maps. And exclusive art prints from Kickstarter-only projects. It's almost a problem. Almost. Recently, I reached out to the folks at Forteller Games - a group of sound engineers, voiceactors, and all-around tabletop game nerds who produce fully-voiced companion apps for board games with a focus on narrative content. I am pleased to announce that I have finished my FIFTH VOICEOVER collaboration with them! All in all, that's a little over 20 different characters! It is very, very cool to bring out a game to play with friends, load up the companion app, and hear your own Man on the Snail (in Red Raven Games' excellent Now or Never) directing you to your next quest.  I'm delighted to be able to merge my hobby with my career in this way, and I look forward to more collaborations with the good folks at Forteller! If you're like me and have a thing for cardboard and plastic pieces, DEFINITELY go check them out at the link below!

I am delighted to announce that I booked my FIRST television appearance this past Fall with The History Channel in their delightful dramatization of the creation of the iconic foods that shaped American trends in THE FOOD THAT BUILT AMERICA! I am featured in Season 2, episode 14, "The Rise of a Rival," as the Pepsi Chemist working alongside the shrewd and cutthroat Charles Guth to develop and patent the syrup which came to be known as Pepsi's trademark flavor. Click the link below to see the whole episode!

THE FOOD THAT BUILT AMERICA 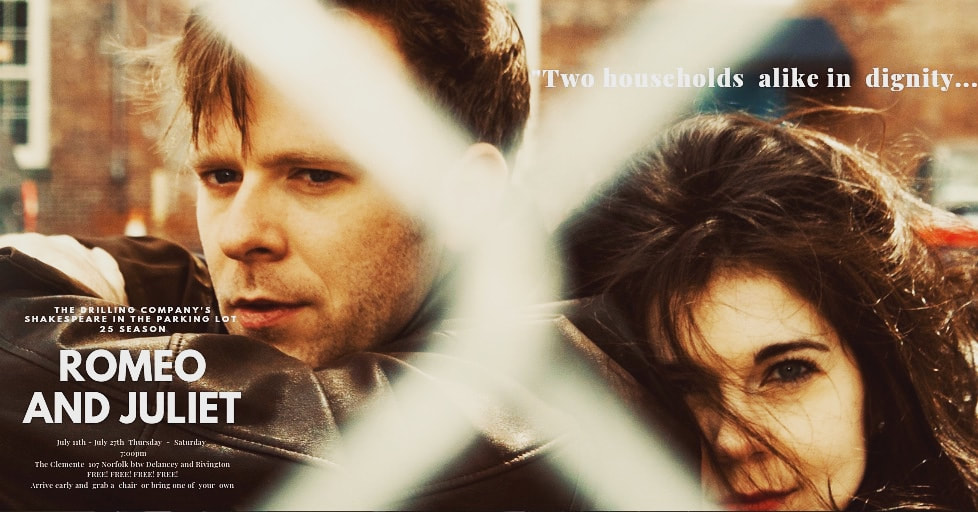 Beyond thrilled to announce that I will be returning to Shakespeare & Company in Lenox, MA to perform with them in the dark comedy of HIR by Taylor Mac! This is a really exciting project with a wonderful creative team attached! The Berkshires stole my heart for 3 years with it's beauty and tranquility while I was training, teaching, and performing with S&Co from 2011-2014. Feeling very grateful and excited to be back there during my favorite season of the year -- Fall!

“Every decade is about a community that is being built as a result of being torn apart.“—Taylor Mac. In the dark comedy HIR, Taylor Mac explores this paradox with the story of a young man returning home from the military to find his family turned completely upside down. Social expectations are confronted head on in this wildly refreshing tale of progressive responsibility. When it comes to family sometimes you just have to figure it out.

ABOUT THE PROJECT:
"What drives our need to connect in a world growing more and more out of touch with.....touch. We touch our phones, we touch our computer keyboards, we swipe, we scroll, we click. The simple act of connecting with another person-even just eye contact-is growing more and more "out of style," especially in a city like New York City. Here, if you're not running late to something, you're answering a work email or uploading a better, more current instagram profile photo. Our dating world isn't as much real life interaction as it is Tinder hook ups and Bumble. Where does our need for real connection get fed?

Ellie, a recent grad, navigates the soul-crushing realness of adulthood after graduate school. She's covered in debt, and over-qualified for every survival job thrown her way. She falls in love with Lucas, a stay-at-home writer gifted with a financially blessed family, giving way to his ability to pursue his dreams worry free. Ellie isn't so lucky, and the fight for her own stability leads her to pursue lesser-used avenues. Her search leads her to discover intimacy and connection outside of her relationship, and all of the convolution that it brings to her world."

CUDDLE is a passion project of my friend, recent collaborator, actress, and writer, Savannah Frazier. Savannah is one of the most impassioned artists I have the pleasure of knowing, and when she offered me a role in her upcoming webseries, I eagerly accepted! We're just getting the script finalized and the team assembled so stay tuned for more updates about this exciting project! This will be the first time I will be acting in a webseries, and I can't wait to get started on this one!

***IF YOU'D LIKE TO DONATE TO THE FUNDING OF CUDDLE AND SUPPORT A FANTASTIC UPCOMING WRITER-DIRECTOR, THERE IS CURRENTLY A SEED & SPARK CAMPAIGN HAPPENING OVER HERE***
CUDDLE

Based on the original text The Adventures of Pinocchio by Carlo Collodi, this new play explores identity,
​a culture of violence, and what it means to become a "real boy."

This is not the movie you know. This is the story of a rogue puppet in a world trying to pull all the strings.

See the work in progress!
And stick around after for a facilitated talkback with our Dramaturg and members of the ensemble!

Location
JACK
505 1/2 Waverly Ave
(between Fulton & Atlantic)
Brooklyn NY 11238
Clinton Hill
ENSEMBLE PLAYWRIGHT PROGRAM
​@ Letter of Marque Theater Co!
The Ensemble Playwright Lab (EPL) is a residency program in which the playwright engages with Letter of Marque's (LOM) ensemble to create, develop, or reimagine a piece of work; which will be presented to the public on Dec 4th at Shapeshifter Lab! 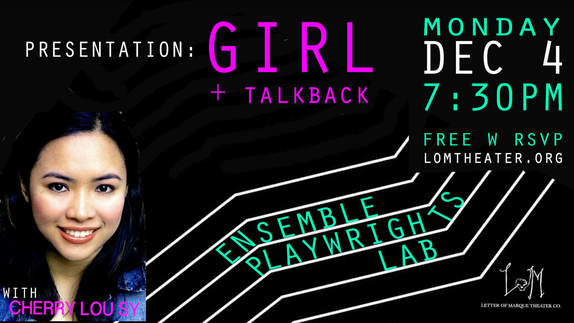 Each residency is uniquely tailored to provide playwrights with the opportunity to collaborate closely with LOM’s artistic directors, literary manager, and professional multi-disciplinary ensemble.

This experimental process of creation and development is designed to welcome the playwright into the rehearsal room through active participation in devised and improvisational explorations.
​
The goals and outcomes of each residency are mutually determined by both LOM and the playwright. ​

​MoreThanAPlay​, by Domenick Danza
All's Well That Ends Well
"Anwen Darcy and Adam Huff are excellent as Helena and Bertram. Their chemistry and attraction is strong. They play the push/pull of Shakespeare’s comic love extremely well. "

Laugh yourself loose at the live absurdist comedy performance at the Mutiny Radio Hour!
The N.E.A. has been defunded, Faux Noos has taken over the media, and even lists are a pre-existing condition! Thus, bravely, the LoM ensemble has done what must done to combat the impending doom…we MUTINY! An original 1 hour galavant in the style of adventure radio with members from the LoM Lieutenants Lab ensemble. ​​
SWORDRAISERS are Letter of Marque Theater Company's on-going themed performance party and fundraising series, where at the end of the night, one lucky attendee will win the coveted TROPHY PIRATE SWORD! Featuring LoM Lieutenants and guest artists, Swordraisers provide a fun and welcoming environment for the LoM community to network and perform new material.

An invited training company of associate artists (the Lieutenants) committed to learning and expanding Letter of Marque's methodology and mission. Each Lab rehearsal is guided by one of the company's co-founders (the Captains) with the intent of building a larger LoM ensemble, exploring new ideas, sharing knowledge, and envisioning works to be presented at one of LoM's Swordraiser events.

"The Lieutenants are the heart and soul of what Letter of Marque set sail to create, and the precursors of adventures yet to come."
​-The Captains
​ 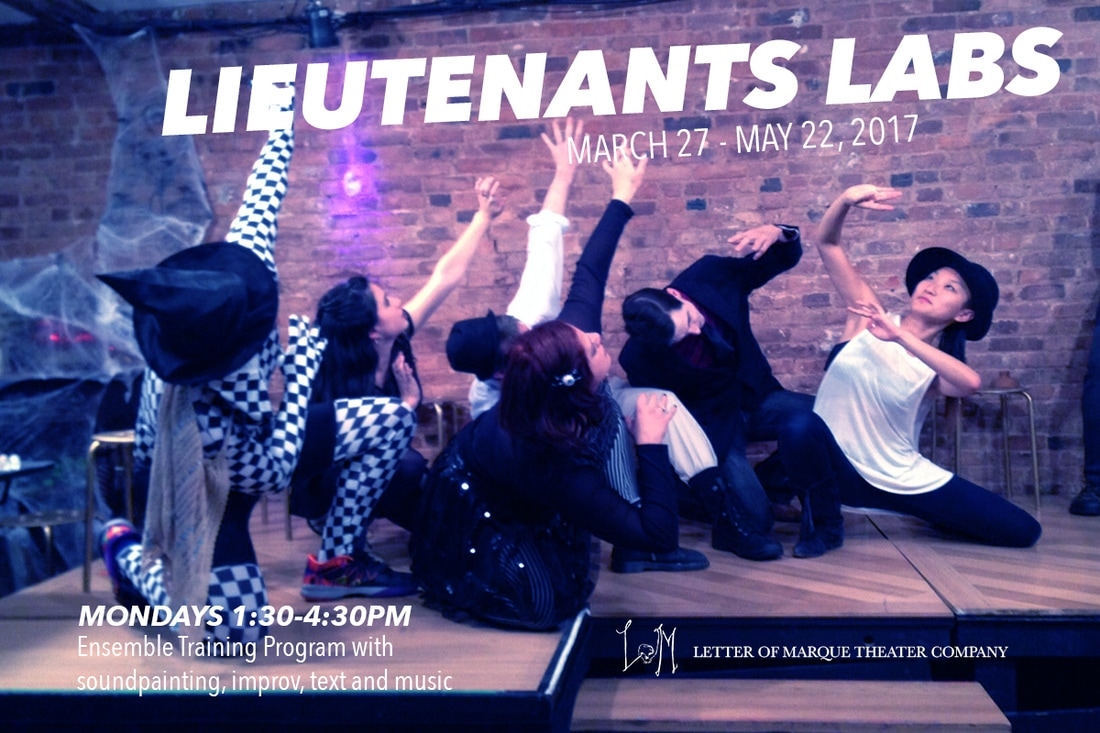 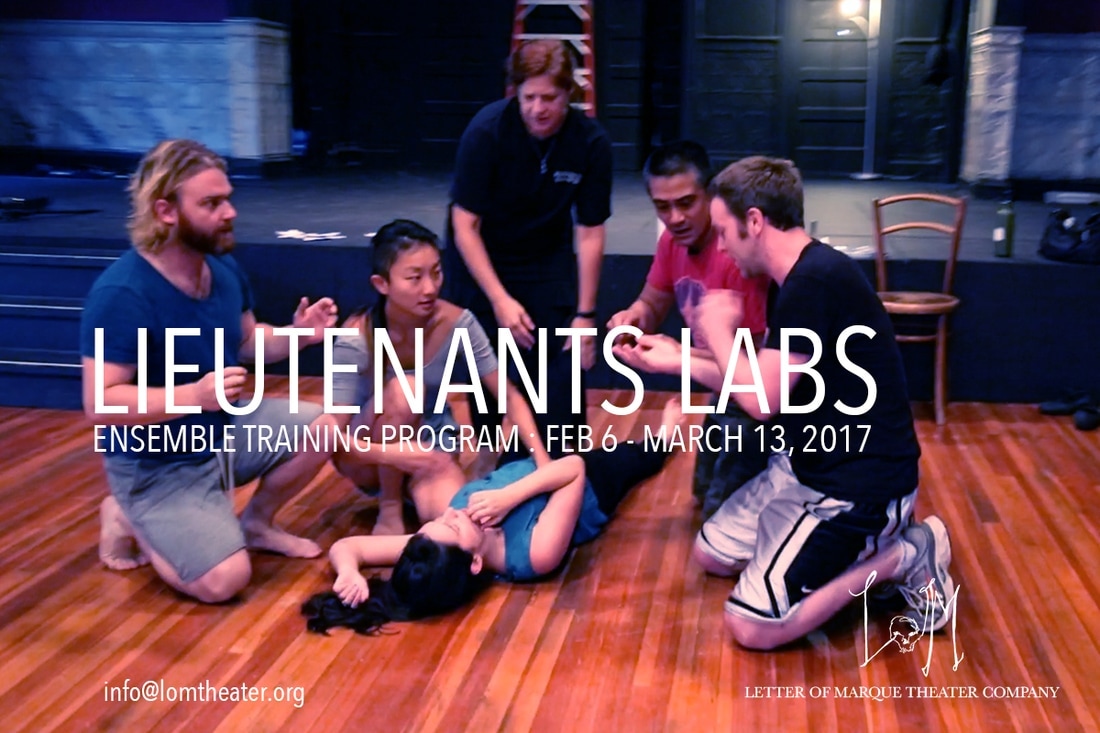 - THE MERCHANT OF VENICE -

​One of Shakespeare's most problematic works makes its Shakespeare in the Parking Lot debut when Ezra Barnes directs "The Merchant of Venice." Renaissance motifs of masculine friendship and romantic love are portrayed in contrast to the bitter inhumanity of the moneylender Shylock, whose misfortunes--as a victim of blatant anti-Semitism--are presented so as to arouse understanding and sympathy.
The Drilling Company's Shakespeare in the Parking Lot
REVIEW COVERAGE for MERCHANT OF VENICE:

​FrontRowCenter.com, by Raphael Badagliacca:
The MERCHANT of VENICE
"Adam Huff gives us a passionate Bassanio; Shakespeare’s words flow naturally for him..."

​Greenpointers.com, by Billy McEntee:
Funky Plot and Savory Performances for Shakespeare in the Theater’s Cymbeline
"Played with a disarming smile by Adam Huff, this Pisanio ascends above the archetypal servant...knowing how to just straddle the line between rebellion and fidelity."
Upcoming Performances during The Brick's Shakespeare in the Theater Festival; July 10 - August 6, 2016

I am excited to announce that I have accepted a role in Stay Awake! Theatre's 2016 Summer production of CYMBELINE in the role of Pisanio. The Production will be part of The Brick's "Shakespeare in the Theater" Festival, and will have several performances during the Festival, which runs July 10 - August 6, 2016 in Brooklyn. Watch this space for more detail as we head into the rehearsal process! In the meantime, check out some links below to meet the company and get caught up on all of the fun at The Brick! This will be the first time I'll be working with Stay Awake! Theatre (as well as the first time I''ll be performing at The Brick), and I can't wait to get started! After the crazy, fulfilling rush that was DOUBLE FALSEHOOD, I'm absolutely thrilled to be working on another lesser-known Shakespeare script!

OffOff Online, by Nicole Colbert:
A Game of Treachery
"As the enfant terrible, Huff does an excellent job and resembles a young Johnny Rotten..His nimble, earthy walk and demeanor give him the charm of a snake making its way slowly toward its prey"

The Reviews Hub, by Maridee Slater:
Double Falsehood – The Irondale Center, New York"Adam Huff (Henriquez, The Duke’s Second Son) wakes the show up with a delightful serenade reminiscent of a young John Cusack in High Fidelity"

The story starts with Henriquez, heir to the Duke Angelo of Spain, as he exploits his social privilege to scheme his way around beautiful women, greedy fathers and honorable brotherhoods, resulting in a disturbing yet enlightening tale of self-repentance and discovery within family, honor, madness, lust and relationships.

​First published in 1727, Double Falsehood is one of Shakespeare’s most obscure plays with much controversy pertaining to its origins and is rarely staged. This will be the first public production of Double Falsehood in New York City in 5 years.